Looking Ahead – Protecting Home From A Hurricane 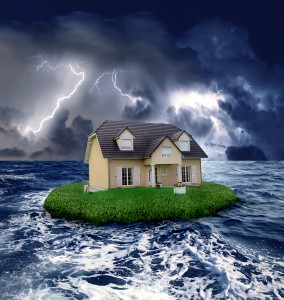 Summer along the east coast can be an exciting time of year. As the weather warms, many people take advantage of living close to the shore, and take excursions to the beach or the Chesapeake Bay inlets. However, warmer weather after a cold winter can also mean that more threatening situations are brewing in the future.

The national weather center has predicted that this could be a highly active year for gulf coast storms. However, this can also highly impact residents along the east coast, either with gulf storms that head back into the Atlantic before looping back to hit the shore, or with massive rain events as the remnants of the storm slowly move overland to the north east along the jet stream. Here are some tips that can lead to protecting home from a hurricane.

Water, One Way Or Another

Although the threat of a head on hurricane can be cause for enough alarm, even extended rain events can lead to considerable damage. This is particularly true when it comes to flooding, and low lying areas of the property, including the basement, can take the brunt of this issue.

With an actual hurricane making nearby landfall, the issue of basement flooding can be caused by storm surge. This is when the change in pressure that has helped to form the hurricane influences nearby bodies of water to rise above normal levels. It is also important that homeowners are aware of this factor, since it can also impact streams, inlets and even ponds and lakes. For this reason, basement flooding from storm surge can happen even if a person does not live directly on the coast.

Both coastal and inland residents in the east should also be aware of the impact that heavy rainfall can have on basement flooding. In the summertime, much of the issue can be caused by run-off, especially if the summer has been hot and dry leading up to the rain event. In these cases, the rain cannot be absorbed by the dry ground quickly enough, and flash floods and washes can happen.

When a wash does occur, the water will follow the path of least resistance, regardless of whether there is a home built somewhere on this way. As a result, homeowners can find that cracks in the foundation or poor drainage around the home also provide a path of least resistance for the water, although this is unfortunately right into the basement.

Another concern with excessive rainfall is actually the opposite of washes, and happens when the ground has done too good of a job absorbing the water. In these cases, the large amount of rain causes the water table to rise, and this can also lead to basement flooding, either through direct water incursion or through condensation that forms from changes in temperature. Either way, the result is still water in the basement, as well as the cost in damages that it incurs.

While the actual weather of the summer will be uncertain until it arrives, it can still be a good idea to take action before disaster happens. This can include ensuring that homes which are closer to the shore have all the appropriate supplies for being safely boarded up and battened down, but this can also include having all homes properly treated to avoid basement flooding. Calling AA Action Waterproofing before the season is in full swing can also mean that less time is spent worrying about weathering any storm that comes through.

This entry was posted in Foundation Repair on July, 01, 2015