Why Weather Across The Country Is Important To East Coast Residents 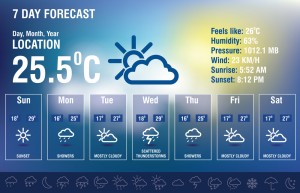 National regions can be very insular, even though they often overlap both culturally and demographically. This is not just an action of social dynamics, but also a very modern personal reaction, especially as technology seems to both generate new lines of connection, but through greater personal isolation. The result is that the natural personality reaction of self-involvement and a focus on factors which can directly impact productivity become higher.

Living In Your Surroundings With Awareness

At AA Action Waterproofing, we completely understand that the pressing matters that are directly in front of residents will take priority, but this does not mean that increasing awareness cannot offer some foresight into challenges that may arise in the future. This can be particularly true for tracking summer storms that can indirectly lead to costly home repairs from basement leaks and flooding.

As an example, a strong tropical depression in the gulf is currently looking as though it will become one of the early named storms in the season, which will also have some considerable power. From the regional perspective, Maryland residents are not highly concerned with this storm development, but it is still possible that they should be.

Even hurricanes which do not hit directly can still produce large amounts of rainfall. As currents carry these remnants overland and back out into the Atlantic, all residents along this path are likely to experience the higher thunderstorm and rainfall activity.

This also means that ground which is already fairly wet from the steady days of rainfall with this slow spring to summer transition, is likely to become saturated within the next week or two. The result is that homes which have compromised foundations, poor property drainage, and cracks in the concrete will also experience a rise in leaky basements and flooding.

Residents of the east coast should stay cognizant of weather patterns throughout the country, as well as the immediate region, since this can also lead to a better ability to avert dangers. East coast residents should also contact AA Action Waterproofing now, so that measures can be put in place to secure the dryness of the basement, and properly and effectively reduce or eliminate basement leaks and flooding, no matter from where the weather is coming.

This entry was posted in Basement Waterproofing on June, 20, 2015

← Basic Thermal Dynamics And Your Flooding Basement
Preserving Memories, And The Home →