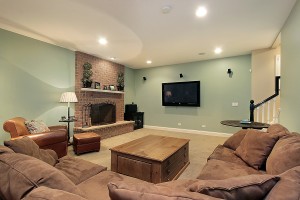 Maryland residents often appreciate the differences in architectural style that can be seen throughout the region and along the Eastern Seaboard. While there is a considerable amount of modern construction that is also present, many of the homes are historic in their construction and design. One of the more common features to many are homes is the presence chimneys and fireplaces within these structures. Although a number of these aspects of construction are still used functionally, some conversions in modern usage could generate issues with water incursion and basement flooding.

At AA Action Waterproofing, one of the more common problems that we see is when a home has been converted to a central heating system and fireplaces have been converted into decorative rather than functional features. What happens is that since the hearths are not being used, the chimney will also no longer need to be attended to with regular cleanings. It is important for homeowners to recognize that chimney maintenance is not just about removing creosote for air safety.

In one home where we were called in to deal with moderate but still intermittent flooding in the basement, we found that the cause was closely related to the manner in which the heating system had been converted. Although the chimney had been capped since the fireplaces were not in use, cracks in the mortar of the stack and in the cap were allowing water to flow straight into the basement by this route.

The result was that the basement flooding would coincide with heavier rainfall, but the evidence of the water coming in might be apparent a few days after the actual precipitation. Thankfully, we were able to trace this problem, and the combination of waterproofing with sealants and the use of French drains along the perimeter of the basement were able to attend to the majority of the problem. While some basic home maintenance and patchwork on the chimney were also in order, the overall expenditure was still far less than having to engage in a full clean up and replacement of property.

Water incursion through chimneys can also happen when a fireplace is still active, but in this instance as well, tracing the actual conduits of the chimney can also indicate where the greatest amount of water damage is likely to happen. Basement flooding in homes with working fireplaces is also a possibility, as heavy rainfall and cracks in concrete easily add up to seepage into the lowest point in the home.

Along with better attention to either decorative or functional fireplaces and chimneys, Maryland residents can also take the precaution of waterproofing the basement before a problem happens. This can help to preserve the structure and the comfort of the home, but can also provide greater peace of mind regardless of the weather.

Contacting AA Action Waterproofing gives Maryland residents the resources they need to ensure a dry a pleasant home, all year round.

This entry was posted in Basement Waterproofing on August, 04, 2015