In A Ton Of Hot Water – Our Experience With Basement Flood 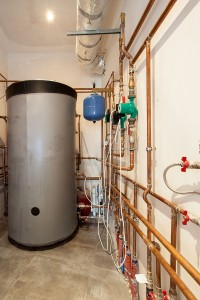 Taking preventive measures to ensure a dry basement can include a variety of actions to contend with nearly any situations. What is important, however, is that homeowners are also able to understand how different waterproofing measures can work, and what types of emergencies to which they may be applicable.

One recent client had called us in for an emergency situation. The homeowner had a complete failure of the water heater, and ended up with close to 80 gallons of water in a very small basement area. The result was that several inches of water was now collected on the floor, and was slowly seeping into places where damage could occur. This included:

As we entered the premises to evaluate the situation, the owner had mentioned that he had spent the past day trying to wet vac the basement, but had made little headway in actually saving much of the property that was stored in the flooded basement.

Initially, a large concern was about mold formation, and quick action can reduce the impact of this happening. Further, the homeowner had expressed frustration in regards to the fact that the basement flood was from an internal issue that he could not have anticipated, versus an external or structural issue he could have addressed.

In developing the best form of waterproofing for this client’s basement, a combination of perimeter gutters and French drains within the basement, as well as a sump pump became the best solution. The result is that water coming in from the exterior could be funneled out of the basement area as easily as water that was from an internal leak. This action could also have prevented the several inches of standing water from the broken heater from impacting the property as much as it did.

Although we often show up after an incident has occurred, AA Action Waterproofing also recommends that Maryland residents contact us for a property evaluation before there is an emergency. This can not only identify known risks for a flooded basement, but it can also make contingencies for unknown factors.

This entry was posted in Basement Waterproofing on August, 10, 2015