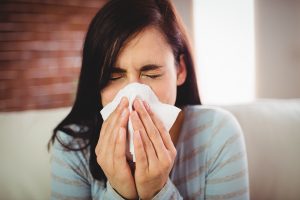 Let’s be clear here: indoor air pollution isn’t as big of an issue as outdoor air pollutants like smog, car exhaust, and factory smoke. Anyone who says differently is probably selling an air purifier, or they’re referring to uncommon problems like asbestos and lead paint dust. However, some common indoor air pollutants can cause problems over the long term, triggering or even causing allergies and asthma, and part of keeping your house clean means keeping these pollutants under control.

A significant amount of the dust that collects in your home is skin flakes, and dust mites are microscopic arachnids that live on these flakes and other organic debris. Some people develop an allergic reaction to dust mites and their byproducts, a reaction characterized by asthma and hay fever symptoms. It’s impossible to get rid of them all, but you can keep their population low by vacuuming, dusting, and changing your bedsheets regularly.

Like dust mites, many people are allergic to cats, dogs, and other animals. However, while this obviously means it’s a bad idea to keep a pet of the wrong species at home, pet dander may still be an issue. Pet owners can wind up carrying the fur and dander of their pets on their clothes, spreading them everywhere to the point where even those without pets often bring some into their homes. Fortunately, the way to prevent pet dander from spreading is the same as with dust mites: clean regularly, and don’t forget to wash your clothes.

Radon is a radioactive gas, and it’s surprisingly common throughout many parts of America. Deep deposits of radium produce radon as they decay, and the gas then seeps up through the rock and dirt, along with the occasional foundation crack. Fortunately, homes built in the 90s and later feature special vents which direct radon through them instead of letting it build up in the house.

Like dust mites, mold is something we can never completely get rid of, and instead we have to settle for keeping the population under control. The term “mold” includes hundreds of species of fungus, and between them they grow on just about anything organic, including old food, wood, and the same dust that sustains dust mites. Mold also tends to enjoy warm, wet places, so you can find it most often in bathrooms and basements with leaky pipes, cracked walls, or even humidity problems.

Mold can also burrow deep into wood and other porous materials, including concrete, and so cleaning off the surface isn’t always enough. If you live in or near the state of Maryland and you have a mold problem that demands professional help, contact AA Action Waterproofing today for a free estimate. We remediate mold growths both big and small, and we can waterproof basements and crawlspaces to make sure the mold population gets that bad again.

← Does Waterproofing Paint Work?
How Does A Sump Pump Work? →