How Does A Sump Pump Work? 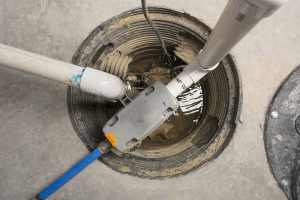 Depending on where you live, a sump pump in your basement may be a waste of money, a cautious investment, or an absolutely necessary accessory. While other aspects of building construction keep rainwater from collecting against the basement walls and leaking in, what a sump pump does is keep the water table from reaching the basement floor and flooding it. But how does it do that?

Sump pumps are named after the sump pit, which is a small two-foot-deep pit dug out of the deepest part of the basement and then filled in with the sump pump, pipes for moving the water, and gravel. These pipes are for more than just pumping the water out: by running beneath the entire basement floor, they can collect water and direct it towards the pit so the pump can remove it.

The pump isn’t on 24/7, since that would be a waste of electricity. Instead, it uses a passive sensor like a float or a pressure sensor to tell it when there’s enough water in the pit to be worth pumping it out.

Most sump pumps use a centrifugal design which pushes water out through a pipe with a device that’s similar to a fan or a propeller. However, this pump can be either above or below the waterline: the submersible design is almost entirely within the sump pit, and it works quietly and efficiently, but the fact that it needs to be waterproof makes it somewhat expensive. On the other hand, the pedestal design draws water up above the pit before draining it away, which makes it cheaper but louder.

If you have an older home which needs a sump pump, or if you need to repair or replace the one you already have, and if you live in or near the state of Maryland, consider contacting AA Action Waterproofing. We handle jobs like basement waterproofing, crawlspace encapsulation, and mold remediation, and this means we’re also the people to call when you have a sump pump problem.