Why Does Soil Affect Your Foundation? 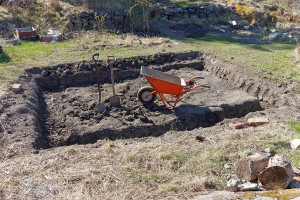 The earth surrounding your home seems like a pretty solid thing; after all you walk on it, and everyone builds on top of it, so it’s hard to think of it as especially delicate. In the short term, that’s true, but for longer periods of time, especially years and decades, soil is a pliable, changeable thing that can have an effect on everything around it, including the buildings constructed on top and in it. But how and why does this happen?

Soil Is A Slow Liquid

Soil is often incorrectly perceived as a solid, fixed point, but anyone that gardens knows this isn’t true. Soil is like sand, or ice. It only appears solid, but is actually made up of tiny particles that all sit closely together and give the illusion of solidity. Soil is a mix of different substances, a combination of decayed organic matter from plants, broken up rock, and clay. Because these individual substances vary wildly from one region to the next, the soil in Maryland can be radically different from the soil in Texas, or California. But one thing remains true regardless of the geology; soil will change over time.

When a house is built, the people who constructed it tried to build it to work with the soil in the state they found it. They couldn’t predict how weather would affect the soil in 50, or even just 30 years ahead. A predominantly rocky soil, for example, might seem like the most resistant to change, but even rock can expand, contract and erode with years of exposure to heat, cold and water. It’s the same for other soil types, whether its loam, clay or sand. Should any extreme weather condition—especially heavy rains or snow melts—cause a higher than normal penetration into the soil, it can slowly affect the quality of the soil and cause that soil to move. It can cause a home foundation sitting on top of it to shift.

This can do anything from causing walls to crack as the home moves in two different directions, to causing an entire house to slowly tilt if the soil is shifting in one predominant direction. Basement walls can show cracking when this happens, and even steps or window and door frames can move out of alignment as a home struggles with a new shift in weight now that the soil it was sitting on is no longer where it should be.

Every home has a different soil situation due to location and construction. If you’d like to know more about your home, foundation and the soil around it, just as AA Action Waterproofing for a consultation. We’ll be happy to determine what your situation is if you notice these kind of foundation problems in your own home.

This entry was posted in Foundation Repair on September, 23, 2015

← Protect Yourself From Sewage Flooding
Do Dehumidifiers Really Work? →