The Leaning Tower Of Pisa: A Foundational Lesson 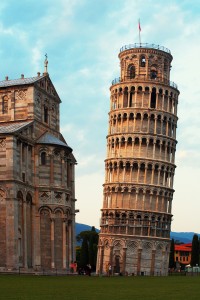 When you’re standing on your own two feet, the world can seem like a pretty sturdy place. Grass and dirt may feel just a little bit springy, at least compared to packed earth or pavement, but overall you can trust that it won’t slip out from under you or randomly list to the side.

However, the ground only seems sturdy because, geologically speaking, humans don’t weigh very much. For houses, offices, and towers, weight starts in the tons and goes up from there. To buildings, the world is a much less sturdy place, something the people of Pisa know all too well.

Mistakes Of The Past

The people of Pisa began construction on the tower way back in 1173, and at the time the stone structure was a marvel of modern architectural design. However, after five years and three floors, the tower began to noticeably tilt to one side.

As it turned out, the tower’s foundation was only ten feet thick, not much for a solid stone eight-story tower, and more importantly it turned out that the dense clay beneath it was not up to the task of bearing the tower’s weight. This weight caused the weakest part of the clay substrate to compact, and as a result the tower began to lean.

Construction stopped for a century after that, but in 1272 they added the remaining floors, thinking the clay beneath the foundation had settled by then. But it hadn’t, and their attempts to compensate for the lean only made things worse.

Today, homes and office buildings have the advantage of modern construction materials and knowledge of geology which goes far beyond anything our medieval ancestors knew. The builders of the Leaning Tower of Pisa didn’t have access to reinforced concrete, for instance, nor did they have ground-penetrating radar to investigate the soil’s composition.

However, while construction workers are better equipped and better educated than in the past, they can still make mistakes and cut corners, leading to a modern house which slowly but steadily starts to list to tilt to one side. Even a perfectly built home can run into trouble if something unpredictable comes along and rearranges the landscape, something like a hurricane, a snowstorm, or even a public works project.

Repairing or replacing a foundation is an expensive prospect, but it’s not something you can afford to put off. A severely cracked or bent foundation threatens the very structural integrity of the house, and it puts everything and everyone inside it at risk. For that reason, it also causes the property value to plummet. And if you procrastinate, the problem will only get worse (and more expensive).

At AA Action Waterproofing, we offer foundation repair services throughout Maryland, DC, Pennsylvania, New Jersey, Delaware, and northern Virginia. If you live in the area and your foundation is giving you issues, contact us today for a free estimate. After all, not every building can take advantage of a structural error to become a tourist attraction.

This entry was posted in Foundation Repair on September, 25, 2015

← Do Dehumidifiers Really Work?
A Feature-Filled Roof Is A Risky Roof →