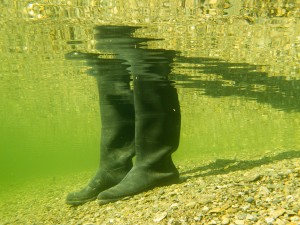 That moment of realization is the worst part. Perhaps you flip on the lights to go put in a load of laundry, or perhaps your kids have scurried to the basement door to go play, only to scream at what they find. An extensively flooded basement is a nightmare for a homeowner. Water, the very thing that is responsible for destroying so many homes, has infiltrated your foundation. The water just sits there, laughing at you.

The seriousness of flooded basements won’t set in for a while. The total cost of the damages can exceed well over $10,000. But the good news is that you can mitigate the damage by dealing with the water the right way, right off the bat. The more quickly you confront the monster in your basement, the more money you will save. There are plenty of steps to take right at the outset. Some of the steps are common sense, but other steps are not so well known. By following these guidelines, you can make the most out of a damp situation.

• Keep your kids and pets away from the flooded basement. There are all sorts of dangers associated with water in the basement, which are discussed later. It may be a good idea to send the kids upstairs, put the pets outside and explain to your spouse the seriousness of the situation.
• Flood water can be contaminated with sewage. This makes the water a serious bacterial threat to you, your family and your pets. If you must go into the water then it is a good idea to wear rubber boots or waders. Even if the water looks clean, it can still be contaminated with all sorts of harmful bacterium.
• Outlets and appliances in the basement make electrocution a hazard, especially if the water is up above the electrical outlets. It is not a good idea to go into the water if the water is above the outlets. If you must go downstairs for any reason, the electricity should be shut off at the main box.
• It is not a good idea to turn on any faucets at flood level until the water recedes. Turning on faucets can introduce harmful bacteria into the water supply, which could actually threaten other households.
• The smell of gas means that there is gas in the air. The slightest spark could set off a fireball or explosion. It is not a good idea to touch any electrical fixtures, telephones or faucets in the presence of the smell of gas.
• Appliances should be inspected by professionals or replaced after a flood. Compromised internal mechanisms can become an electrocution hazard in the future.
• It is a good idea to discard anything that you may want to ingest that was in the basement. This includes food and medication that came in contact with flood waters.
• When entering the flooded area, keep in mind that all surfaces touched by the water is now extremely slippery. Falling in the flood waters can introduce harmful bacteria into your body.

← The Barriers To DIY Basement Waterproofing
The Misconceptions About Foundation Repair →