So You Need A French Drain. Now What? 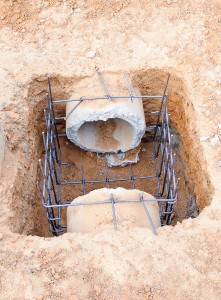 A French drain is a simple drainage solution that is often mistaken for something far more complex. One factor affecting this perception could be the French drain’s many aliases. A French drain is also called a weeping tile, a blind drain, a rock drain, a rubble drain, a drain tile, a perimeter drain, a French ditch, a land drain, a sub-surface drain, a sub-soil drain, or an agricultural drain. With so many different names, it can be easy to get confused about what it is that is actually being installed in your basement.

In its simplest form, a French drain is a trench dug around the inside perimeter of your basement and outfitted with perforated hollow pipes along the bottom that allow water to seep out through an upper layer of gravel or rock. The gravel or rock layer can be covered over with a think layer of concrete to maintain uniformity with the rest of your basement floor. A sump pump may be used in concert with a French drain to facilitate drainage.

As far as the perception that the installation of a French drain is a lengthy and complicated procedure, this too is false. In fact, in many cases a French drain can be installed in just a day or two. Of course, the relative ease with which a French drain can be installed does not mean that you should rush down your basement stairs this very moment with a jackhammer to begin breaking up the concrete around the perimeter. A French drain is not a DIY project. It is a drainage solution that should only be undertaken by a skilled professional. If you have been advised that a French drain might be the solution for your basement drainage issues, contact AA Action Waterproofing today for a free quote.

This entry was posted in Basement Waterproofing on October, 23, 2015