Where Does Mold Come From? 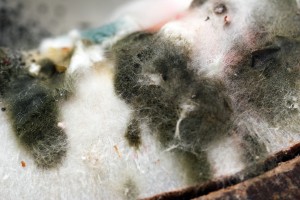 The short answer is, “everywhere.”

Molds are a type of fungus, a massive kingdom of organisms which don’t generally move around, survive on oxygen and organic matter rather than sunlight and carbon dioxide, and reproduce by releasing clouds of practically indestructible spores.

It’s that last aspect that makes it impossible to completely get rid of mold in any home in practically any part of the world. Living colonies of mold can be destroyed through a combination of fungicide and plenty of scrubbing, but not even a good air filter running at full strength can completely eliminate every last spore from the air. Instead, mold is “remediated,” or brought back to the median level which you can expect in the background of any given home.

There are over 100,000 mold species out there, including the genus Penicillium which provides the world with lifesaving penicillin. Other molds grow in cheeses and are responsible for the sharp flavor of bleu cheese, among others. Even so, some of these same molds also release mycotoxins which cause respiratory problems in those who breathe them in.

These symptoms strongly resemble an allergic reaction, and so one way you can tell if you have a mold problem is to pay attention to your nose when you go out and come back home: if you spontaneously get a runny nose while you’re at home and it clears up when you leave, then you probably have mold building up somewhere and it’s probably what’s making you feel miserable. In old, drafty homes, these spores didn’t have a chance to really build up, but with better air recirculation has come a higher density of in-home pollution.

As tenacious as mold spores are, mold itself can only grow where there’s a steady supply of moisture or at least a high humidity. Different mold species will grow on different substances, but every living thing needs at least some water to live. That’s why it’s important to control moisture inside your home, whether by using a dehumidifier, running the bathroom fan during and after a shower, or by repairing and waterproofing your basement.

If you need help with moisture or with mold, and if you live in Maryland or an adjacent state, you should contact AA Action Waterproofing for a free estimate on waterproofing your basement or crawlspace, remediating mold levels, or both. With over 27 years of experience and an A+ rating with the Better Business Bureau, you can rest assured that we’re one of the best contractors on the market.

This entry was posted in Mold Remediation on January, 07, 2016