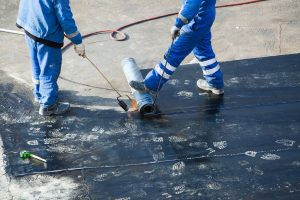 The community of Silver Spring, Maryland is well over 150 years old at this point. While it initially served as a quiet retreat for politicians and other important families, when the suburbs exploded after World War II, Silver Spring grew to become one of the most populated parts of Maryland.

Because of this, Silver Spring and the other suburbs of Washington are full of houses dating back to the 1940s and 50s, making them well over half a century old. Many of these homes have had to deal with problems you don’t see in modern homes, such as lead paint and asbestos insulation, but there’s one other problem which comes with time which even the most modern home will someday have to face: a leaky basement. As such, you’ll often hear the cry of “Waterproof my basement!” in Silver Spring.

No matter how sturdy a thing is, it’ll eventually crumble of you don’t take care of it for long enough. Half the stands of the Colosseum in Rome have collapsed over time, and even some of the simple rocks of Stonehenge have fallen out of place. Your home’s foundation is no different, and even though the ground may feel sturdy, it’s always on the move.

When the ground freezes in winter, it turns hard because all the water that made it soft has turned into ice crystals. Ice takes up more space than water, and so in the process of freezing the ground expands slightly. Humans don’t notice this change unless they’re measuring it, but this expansion puts pressure on the roads and on your basement walls.

There are ways to reduce this pressure, of course. The loose rocks and gravel which serve as excellent drainage also protect basement walls and paved roads from the changing pressures of the ground, but if you’ve ever driven over a single road for more than a few years you know that nothing lasts forever. Asphalt roads develop cracks and potholes over time, and likewise a cement wall and floor can only hold up for so long.

Here’s Why You Should Care

Before you decide whether to shout “Waterproof my basement!” in Silver Spring or not, you should know why it’s important to do so.

• A crack in the foundation or the basement walls can let in moisture or actively leak, thus allowing mold and other household pests to thrive. Black mold is bad enough thanks to the way it can cause cold-like symptoms in humans and other animals, but insect pests can include silverfish, centipedes, and even termites.
• Moisture can also lead to further damage to the foundation itself. If the ground settles in such a way that it causes water to flow towards the building and not away, it can wear away at the concrete and start leaking in within a surprisingly short time frame. From that point, the damage will only get worse until you fix the drainage problem.
• A cracked foundation is less secure than a whole foundation, and it can cause the entire house to start settling unevenly. This leads to uneven floors and eventually to permanent damage within the structure itself, and while it may be fine to live in for years or even decades after the crumbling begins, someone will eventually have to repair or replace the foundation.

Here’s What You Can Do

When you say “Waterproof my basement!” in Silver Spring (or wherever your property is) to the right building contractor, you’ll be calling on a team who can repair cracks in your foundation and basement walls, remediate significant mold growths, and also repair and waterproof crawlspaces. A good waterproofing contractor can also help by fixing other sources of moisture in your basement, including uninsulated pipes and summer humidity.

And if you do live in the Washington-Baltimore-Arlington Metro Area, or even if you live in a nearby state like Pennsylvania, Virginia, or Delaware, then the contractor you’ll want to call is AA Action Waterproofing. We’ve been in business since 1987, and in all that time we’ve never seen a basement or a crawlspace we couldn’t improve. So if you ever feel the need to shout “Waterproof my basement!” in Silver Spring, let us know and we’ll give you a free inspection and written estimate.