The Winter Freeze And Bursting Pipes 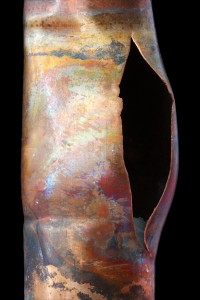 Ice is a force to be reckoned with. The Great Plains are what you get when enough ice forms all in one place: the landscape itself flattens out, with the only hills being the scraped-up remains of former mountains and the only lakes being the puddles of ice water which the melting glacier leaves behind.

Even in quantities smaller than a glacier, melting and freezing ice can cause an impressive amount of damage. For instance, the reason you shouldn’t thaw and refreeze frozen foods is because this process causes the expanding ice to destroy the cells in the food, ruining its texture. Expanding ice can also cause otherwise sturdy pipes to burst, and this can lead to flooded basements, foundations, or even just too much water in the nearby soil.

Mind you, bursting pipes aren’t exactly common today, especially in a state as far south as Maryland. Still, while it may not be a major concern for an occupied house which keeps its heater on throughout winter, the situation is different for unoccupied properties. Whether a family chooses to live further south during winter to avoid the freeze or whether a building is left uninhabited for some other reason, the heater should remain in good condition and should keep the temperature at least above freezing in order to avoid the possibility of a pipe freezing and bursting.

A burst pipe can cause significant water damage even if it doesn’t break within the house itself. Too much water all at once can damage the grass and trees in your yard, especially if it’s freezing as it soaks through. Excess water can also cause erosion damage to the ground below and beside your foundation, leading it to settle at an angle and putting the entire structural integrity of your property at risk.

If you need advice about keeping your pipes and your basement safe and moisture free, or if you need some professional foundation repair, contact AA Action Waterproofing. We serve customers throughout Maryland and the surrounding states, and we’re well aware of how urgent it can be to repair a burst pipe as soon as possible.

← The Benefits Of Mold Testing
With Drainage Issues, A One Size Fits All Approach Won't Do →