Not Every Flood Fills The Streets 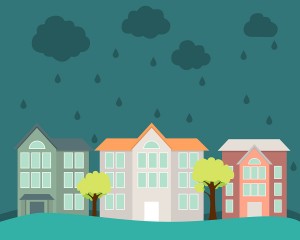 For many people, it’s not a proper flood unless there’s a newscaster (or some anonymous local) floating down Main Street in a rowboat. It’s an iconic image that aptly demonstrates that a boat has become a better means of getting around than a car that would either sink to the bottom or get carried away by a powerful current. However, floodwaters don’t have to get that deep to ruin someone’s home.

For instance, a flood doesn’t need much more than a couple feet to pick a house up off its foundation and drag it a hundred feet away – all it needs is a current that’s powerful and persistent enough to push it. Similarly, a flood doesn’t even need to reach the surface to damage something that’s buried underground, and even if the water level doesn’t quite reach your street, the water table in the soil would still be most of the way there.

This complete saturation can have dire consequences for any basements or other foundations in its wake. The water in the soil can have the same energy that can push entire houses out of place, and it can chew away at concrete and soil alike if it feels the need. That can mean cracked or displaced foundations, flooded basements, or even a collapsed basement wall.

It can be difficult to defend against this kind of power, but it’s not impossible. A good drainage system with an even better sump pump may be able to keep the local water level from getting too high, and failing that a durable waterproof coating along the basement walls can keep the water from permeating the concrete and compromising its strength.

If you live in on near Maryland and you’re looking to improve your home’s flood defenses, you should contact AA Action Waterproofing. We’ve got a strong reputation for excellence and over 27 years of experience dealing with basements, crawlspaces, and foundations of all kinds.

This entry was posted in Structural Damage on December, 17, 2015

← 3 Room Ideas For Your Basement
How Will Basement Waterproofing Work For My Home? →