Hydrogen Bonds And The Chemistry Of Ice Damage 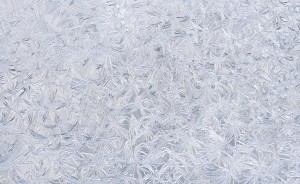 For the most part, materials expand when they get hot and shrink when they get cold. However, water is different, at least when it’s allowed to cool slowly, and the reason for this is known as the hydrogen bond. It’s also one reason why water can cause so much damage.

Hydrogen bonds tend to form at lower temperatures when the water molecules aren’t all bouncing around, and they form more often when water cools more slowly and the molecules have the chance to arrange themselves before freezing. Hydrogen bonds are the reason why snowflakes form crystal patterns, and they’re the reason why ice is less dense than water and floats to the surface.

Hydrogen bonds are also the reason why cracks will form and grow each year in solid stone and concrete. When water seeps into concrete and freezes, the expansion puts pressure on the stone and it can slowly but surely force a crack to form along the weakest section. This crack provides more room for water to get in, and next year the extra water will put extra pressure on the weak spot, forcing it to open wider and make the problem worse and worse as time goes by.

This is just one reason why you need to address water damage to your basement or foundation early and comprehensively. If you spot a problem early, you can fix it without too much expense, but if you leave it be it will only grow worse in size and cost. Even if freezing water isn’t a major problem where you live, liquid water still has powerful erosive properties and it can lead to mold and mildew.

If you live in Maryland or in the surrounding states and your home is suffering from water damage, you should contact AA Action Waterproofing for a free waterproofing estimate. With winter coming up, it’s important that you address the problem now and not after another seasonal freezing and thawing has made your situation worse.

This entry was posted in Water Damage on September, 14, 2015