Give Water A Place To Go (Other Than Into The Foundation) 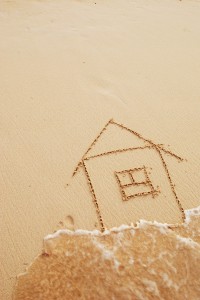 The first thing many people do when they buy a home is to wage war on water. People who live in especially wet areas of the country, which is essentially anywhere but the arid Southwest United States, must fight a constant battle to avoid flooded basements. The changing of the seasons, expansion and contraction, big storms and burst pipes can all lead to the dreaded flood, which can cause expensive damage to the home.

One of the best ways to fight this battle is with drainage. Water literally goes down the path of least resistance, so it is a good idea to control that path. Otherwise, nature will control it for you. When nature controls it, little channels of rainwater will flow toward your home and burrow into the ground right up against the foundation. This water makes the ground swell and attack sthe integrity of the foundation.

But you can get out there with a shovel and control the flow of rainwater. The easiest way to do this is to dig simple trenches that lead down a slope away from the home. While this is effective, it is unsightly. And without support, the ditch will eventually cave in.

You can provide support by filling the ditch with rocks. Water loves to flow around rocks and down easy pathways, but exposed rock-filled ditches may not be desirable. They will look like spider webs of open earth leading away from the home and you don’t want anyone stepping in them.

The last option is to go buy some PVC piping and drill a bunch of holes in it. This won’t make it a very good pipe, but water can now get in it. A pipe laid in a bunch of rocks inside a ditch and then covered with dirt will provide an unseen, underground ditch that water will love to flow down.