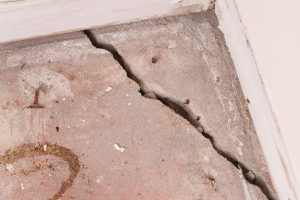 Likewise, the homes in Upper Marlboro are a unique blend of old a new, with both charming colonial masonry and modern wood and concrete constructions. Unfortunately, the way foundations are built have changed tremendously over the course of the last three centuries. Foundation repair in Upper Marlboro has unique challenges due to the variety of foundations found in the town.

How Do You Know If Your Foundation Needs Repairs?

Whether you have a modern cement foundation or an old stone or rubble foundation, the root cause of almost all foundation problems is an excess of water. On the East Coast, between winter blizzards and nor’easters, and summer hurricanes, it’s impossible to avoid large fluctuations in soil moisture near your foundation.

• A dank or musty smell coming from the basement
• Visible signs of mold in the basement
• Uneven, sloping, or warped floors
• Cracked bricks, cinder blocks, or mortar
• Rotation of the walls
• Cracking or bowing walls
• Doors or windows that won’t close or open
• Cracking or separating moldings
• Spaces between the wall and ceiling or floors

In modern cement foundations, there are a variety of repair methods available to professionals. Simple crack repairs and waterproofing can address some issues, while some problems may require a complete foundation replacement.

Stone and rubble foundations require different repair methods. Stone foundations have usually long since stabilized and usually do not need to be raised or supported. The larger problem with stone foundations is usually shifting stones, and water permeability.

To keep stones from shifting, it is important that a qualified mason re-point the walls of the foundation, repair any cracks in the mortar, and stabilize the wall against structural failure.

Water management is also an important part of preventing further degradation and may require waterproofing the foundation and installing drainage systems.

Foundation repair in Upper Marlboro can be expensive, but if you notice any signs of foundation problems, it is important to address the issue before more extensive damage occurs.