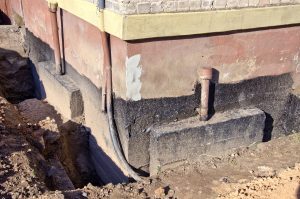 The Perry Hall Improvement Association has been a fixture of Perry Hall governance since World War II, overseeing the rapid growth in northeastern Baltimore County after the war. Most of Perry Hall’s homes were built during that period of expansion, featuring new construction methods that took advantage of the ease and cost-effectiveness of concrete foundations.

Concrete foundations have their benefits, but if improperly built, they can shift and sink, resulting in structural damage. They can also be vulnerable to leaking if there is excess water around the foundation. Luckily for Perry Hall, there are few bodies of water in the town that cause flooding.

Unluckily for Perry Hall, the mid-Atlantic weather that affects the rest of the Baltimore region affects the town as well. Perry Hall gets an average of 44 inches of rain and 20 inches of snow throughout the year.

As you well know, all that precipitation isn’t evenly distributed throughout the year. It comes in unpredictable bouts of blizzards, nor’easters, and hurricanes that dump several inches of water in a short period of time.

In certain circumstances, the large influx of water can cause foundation problems, the most common of which is a leaky basement caused by runoff.

If you find that water is leaking into your basement soon after each rain or snow storm, it’s a pretty good indication that the leak is caused by runoff. If your basement is always wet, you may have a different problem, and a company that specializes in foundation repair in Perry Halls can diagnose the problem and suggest cost-effective solutions.

Even without cracks, excess water around your foundation can eventually seep its way into the interior of your foundation through capillary action caused by hydrostatic pressure.

A company specializing in foundation repair in Perry Hall can use several techniques to address the leaking basement.

In extreme circumstances, a company specializing in foundation repair in Perry Hall can also install interior or exterior drainage systems.

An exterior drainage system is based on a similar concept, but it is installed along the exterior perimeter of your home. The drainage pipes route underground water around and away from your foundation.

Although these methods may be costly, installing them before water causes structural damage to your foundation and home can save money in the long run.

A commonly overlooked issue in foundation repair in Perry Hall is mold. A leaking basement often leads to the growth of mold or mildew. Molds and mildew feed on dead organic matter, which is found in abundance in your basement with wooden beams and drywall commonly serving as fodder.

Not only do molds and mildew cause an unpleasant smell, they are also harmful to human health. They release spores and toxins which commonly lead to respiratory problems.

If you have a leaky basement, you could have a mold problem without even knowing it. A good foundation repair company in Perry Hall should not only provide repair services, but also mold remediation services, to ensure you and your family’s health.