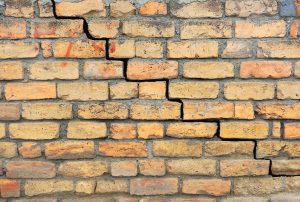 As an independent community on the outer rim of Washington’s Metro Area, Germantown, Maryland became what it is today thanks to a housing boom in the late 50s and early 60s, followed by another boom in the 80s. As such, many Germantown homes and buildings are three decades old or older. And while many of the foundations laid for these buildings are still in excellent condition, more than a few houses are in need of foundation repair in Germantown.

The Impact Of Time

If you were to talk to a foundation expert, he or she would tell you there are two kinds of foundations: those that have cracked, and those that haven’t cracked yet. Concrete is a tough material, and we’re constantly coming up with even tougher mixtures, but the Earth is tougher still.

Soil is always on the move, especially on hillsides and other slopes, and as it moves it can exert a slow but steady lateral earth pressure on basements and other foundations. The soil beneath a foundation can also settle over time, causing it to warp and crack. On top of that, the water in soil causes its own sort of trouble by freezing and expanding during winter and then contracting in spring.

The Impact Of Cutting Corners

On top of what the Earth can do, there’s also the fact that not every house meets the highest of standards, especially not when they’re built during a boom period. That’s why it’s especially important to consider foundation repair in Germantown and other major suburbs.

A house built to code has a certain minimum quality level, but that still leaves construction companies with some wiggle room. For instance, while a poured concrete basement is the strongest option you could ask for, many basements are made of concrete blocks instead since they’re cheaper and faster to put up. Of course, they’re also weaker and more prone to cracking under lateral earth pressure. And even if the concrete foundation is poured, the construction company might rush the curing process, making it weaker in the process.

Also, both building materials and building codes are constantly improving over time, so a house built in the 60s would never pass muster today. The fact that we don’t use lead paint or asbestos insulation anymore are just two obvious examples, but the concrete used in modern foundations is also much better.

The Impact Of Foundation Repair Germantown

Getting a foundation repair in Germantown may be less expensive than you think. For the most part, it’s a simple matter of filling in cracks with extra concrete or an epoxy mixture, and a handy homeowner may be able to tackle the project him or herself. Even if a basement wall is starting to buckle under the lateral pressure, you can brace it with carbon fiber or steel strips, and the whole process isn’t all that intrusive unless your basement is already finished and you have to pull off the drywall panels and insulation to get at the concrete.

Other times, more drastic measures may be necessary, although they still don’t cost an arm and a leg. Installing wall anchors involves attaching metal poles to the nearby bedrock and using them to hold a basement wall in place. A foundation contractor can use a similar process to stabilize a foundation slab that’s settling unevenly, although it’s called piering in such cases. Other ways to stabilize a slab include pumping grout or a special polymer into the unstable area underneath the slab.

Even a complete foundation replacement isn’t as expensive as it used to be in previous decades thanks to modern technology. It’s still your most costly option and a last resort you should only consider when the foundation is crumbling to pieces, but the usual cost is now a much smaller fraction of the cost of the house.

When it comes to foundation repair in Germantown or any other suburb from Virginia to Pennsylvania, AA Action Waterproofing can help. We’ve repaired foundations, waterproofed basements, and remediated mold outbreaks ever since 1987, and in all that time we’ve never encountered a basement or foundation we couldn’t handle. If you live in or around the state of Maryland, you can contact us today to set up a free initial estimate and inspection.