Why Encapsulate A Crawl Space? 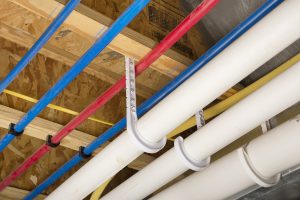 If your home doesn’t have a basement and the floor isn’t flush with the ground, you most likely have a crawl space. A crawl space is a spare couple of feet that separate the first floor of a house from the ground, mostly for a little insulation and to have room to run pipes and wires beneath the floor, and while a few vents come standard to provide air circulation, they aren’t exactly the best solution to the problem of water evaporation.

Many crawl spaces have dirt floors, dirt which releases water vapor which then gets trapped in the crawl space and condenses on the wood above it. This allows mold to flourish, including certain species which are known to cause allergic reactions in humans. Even if the crawl space’s base is concrete instead, water vapor can still pass through it.

A crawl space encapsulation involves covering the base and sides of the crawlspace with airproof plastic, adding an active vent which redirects gasses from below to a spot outside of the house, and a dehumidifier which keeps the crawl space’s air dry.

By redirecting the water vapor, an encapsulated crawl space has much less mold growth and thus improves the air quality of the entire house. It can also serve as a safe, dry storage area, something a normal crawl space isn’t. On top of that, the fact that the encapsulation system redirects gasses also means that the home is safe from radon.

For nearly 30 years, AA Action Waterproofing has served the state of Maryland and beyond by waterproofing basements, remediating mold outbreaks, and repairing buckling and cracked foundations. We know how to encapsulate a crawl space as quickly and efficiently as possible, and we get the job done right the first time. If you want us to look at your basement or crawl space job, contact us today to get a free initial estimate.

← It’s Not The Heat, It’s The Humidity
What Should I Do If I’m Selling A House With A Leaky Basement →