How Does El Nino Affect Your Home? 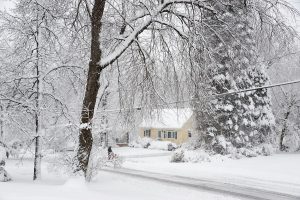 A meteorological phenomenon occurring in the Pacific might not seem like it should be of much concern in Maryland, but the exact opposite is true. We live in a world where weather patterns thousands of miles away have consequence as they move inland, interacting with mountains and various high and low air pressure pockets along the way. El Nino is one of those phenomena, and it has far ranging consequences for the entire USA, including the state of Maryland. But first, let’s learn a little bit about this occurrence.

What Is El Nino?

In the simplest possible terms, El Nino, which is Spanish for “Christ Child,” is a weather event that takes place every few years, normally during the Christmas season in equatorial South America, hence the Spanish language origin. El Nino is an ocean event where the temperatures at the equatorial Pacific are higher than normal. This results in a warmer ocean, which results in warmer air over the ocean, which then moves west to the USA, and can subtly change the areas through which the jet stream flows over the country, in addition to bringing in more moisture inland.

On the west coast, which gets the full, unadulterated brunt of El Nino, this can result in heavy, intense rains that may even cause devastating flash flooding, as we saw this year during the 2015-2106 winter. However, the weather changes don’t stop there, and continue westwards, getting “blunted” by the Rocky Mountain range, to spread across the rest of the country.

What It Means For Maryland

By the time El Nino arrives in Maryland, we’re usually in the middle of our winter, which means—as you may have already guessed—heavier than average snowfall. Depending on the conditions in any given year, this mean a lot of different things for a Maryland home.

For example, frost heaving may become more of a problem for a particular year if the environmental conditions are right. This means that a lot of snow may have fallen, but warmer weather at some point in the winter melts it to liquid which then flows into the soil. However, if temperatures drop again, that liquid in the soil can freeze, and with all that ice packed into the soil, squeezing against a house, it may actually “heave” a foundation off its base. The foundation will settle back down again when spring comes and snow melts, but it may have moved slightly from its original position. If this continues year after year, a foundation may slowly move off balance, which can eventually result in damage.

Another factor is, of course, increased snow which means increased moisture. When the snow melts, depending on the kind of waterproofing protection you have in your home, and how clear your roof gutters are, this may create more liquid in the ground than your house can handle. It may result in a leaky basement if you haven’t already taken the precautions.

El Nino typically means more storms because of the increased moisture it brings to the air. For Maryland, it usually results in more snow, but the lingering after effects of the phenomenon can affect the weather in the region throughout the year. This does mean there is an increase in the chance of water penetrating your home if you don’t take precautions, but a lot of this varies with the exact geological characteristics of your home’s location, combined with the weather conditions.

A professional inspection of your home and its surroundings and foundation can give you a clearer idea of what you can personally expect when it comes to your home and how the weather may affect it.

← Is Your Pool Telling You Something About Your Foundation?
Why You Should Waterproof Your Crawlspace →