Few places in the world are both as new and as old as the suburbs of East Coast America. The community of Adelphi, for instance, takes its name from the Adelphi Mill, which started out as a place for local farmers to grind grain into flour back in 1796. However, suburban neighborhoods now sit where the old farmland once was, and while the old Adelphi Mill is still standing, most of the houses in the area are closer to half a century old than they are to 200.

You might think that 50 years isn’t enough time to have to worry about foundation issues like seepage, cracks, and leakage, but that can depend on a lot of factors, including construction materials and quality. Construction companies sometimes cut corners during housing booms like the one that followed World War II, and this can lead to problems a few decades later. That’s why it’s important to have services like basement waterproofing in Adelphi and in all the greater Washington area.

The Power Of H2O

Water is the most powerful erosive force on the planet. It may seem harmless enough when it’s a river coursing downstream or when it’s raining on a field thick with grass, but most of the potholes and cracks on American roads show up thanks to water, thanks to the way water expands and contracts as it freezes and melts. A flood can do even more: tear up pavement, carve out completely new riverbeds, and even lift entire buildings off their foundations.

From ancient times to today, humans have always built their homes to keep water away as much as possible. We put angled roofs on houses so that water and snow will flow away from the building, and we add gutters to keep water from pooling next to the foundation. For modern buildings, we even surround the foundation and basement walls with sand and gravel so that water can flow down into the drainage pipes below instead of sticking around and infiltrating the basement walls. 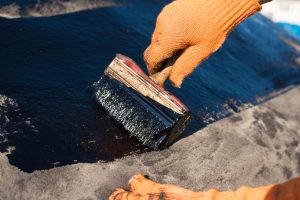 The Purpose Of Basement Waterproofing

Most of the waterproofing for any building happens during the construction process. So why would you need to contact a company like AA Action Waterproofing after this point? The reason is that everything tends to break down over time, and that includes your home’s ability to keep water out.

For instance, not many people outside the construction industry know that one key way to keep water from getting into the foundation is to make sure the ground slopes ever so slightly away from the sides of the house. If it doesn’t, rain and even sprinkler water can pool along the edge of the foundation and slowly infiltrate the concrete. This can become a problem for your home because the soil will slowly settle and move around over the decades. It may also happen because you or a previous owner added a garden along the side of the house and didn’t know about this rule.

The process of basement waterproofing in Adelphi and other locations can also involve checking for other ways water tends to get into a basement. The underground water table can sometimes rise up to the point that the normal storm drain system can’t keep it away from your foundation, or the home may be too old to have this system in place. In such cases, we will sometimes install a sump pump, a device that pumps groundwater out and away from your home.

Basement waterproofing in Adelphi or other Maryland locations may also turn out to be a surprisingly simple matter. If humid air is getting trapped inside your home, it may be condensing on cool metal surfaces in the basement, surfaces like pipes and metal shelves. Even just that amount of water can cause water damage, mold outbreaks, and support pest animals like ants and termites.

If you’re in need of basement waterproofing in Adelphi, foundation repair in Silver Spring, mold remediation in Bethesda, or if you need any of these services elsewhere in Maryland and beyond, AA Action Waterproofing can help. Our first estimate is always free, so you won’t have to worry about paying for our services until you know how much they’ll cost.